Elizabeth Moir School students have won scholarships and financial aid worth a total of nearly $1 million per year to enable them to attend some of the most prestigious universities in the world, despite the current economic situation.  These places mean the school will have students at 6 of the 8 Ivy League colleges in the US in 2022, as well as having 3 students starting courses at Oxford or Cambridge in the UK, and 2 at Stanford in California.

Only five US universities are need-blind and offer full financial aid to international students, and they offered a total of six places to Moir students – at Harvard, Princeton, Yale and Amherst.  This aid covers accommodation, food and living costs as well as tuition.  Nine other students received full or nearly full financial aid at other universities, including two at Stanford.

Moir Captain of School, Malaika Sequeira, will become the school’s 8th student at Harvard in just 13 years, the last four of whom were also Captain of School.  She was also offered a place at Princeton.  Harvard is currently ranked 1st in the world in the ARWU rankings.  This year, it admitted only 4% of applicants, a rate that is likely to be much lower for international students.

Amadie Gajanaike was also offered places at two Ivy League colleges, Yale and Princeton, as well as Duke and Georgia Tech.  She chose to study Engineering, Architecture and Visual Arts at Yale, where she was offered aid of $70,000 per year, and will be the school’s second student in consecutive years.  Amadie’s application stood out due to her incredible academic record: she achieved eleven 9s in her IGCSEs as well as the World Prize for the highest mark in IGCSE Art.

Leeth Singhage and Hansi Gunawardena were both offered places at Stanford, ranked 2nd in the world by ARWU, with Hansi also receiving offers from Ivy League Columbia and USC.  They received financial aid worth over $70,000 and $60,000 per year respectively.  Located in Silicon Valley, Apple, Google and Facebook all recruit more employees from Stanford than any other college.  Leeth and Hansi reflect the diverse strengths of the school’s students:  Hansi studied Further Maths and plans to become an engineer; Leeth studied Arts subjects and hopes to have a career in film, having already appeared in British TV comedy The Good Karma Hospital.

Lily Shen, Navik Bandara and Serika Siriwardhana were all offered places at Oxford or Cambridge.  This is an incredible achievement given that there are currently only 8 Sri Lankan undergraduates at Oxford or Cambridge in total, across 3 or 4 years (including others from Moir).  Lily was accepted to study Psychology, Philosophy and Linguistics at Queen’s College, Oxford; Navik will read Mechanical Engineering at University College, Oxford; and Serika is going to Corpus Christi College, Cambridge to read Human, Social and Political Sciences.  Other students were offered places at Imperial and University College London, both also ranked in the world’s top ten.

Venumi Gamage and Dineth Wijayawardana were offered places with very generous financial aid at Amherst College, ranked the top liberal arts college in the USA by Washington Monthly.  Their very high SAT scores (1580 and 1590, respectively, out of a maximum 1600) placed them in the top 0.1% of over 2 million students who took the test.  This is the second year in a row that Moir students will be going to Amherst.

Arshana Welivita is the school’s second student in two years to be offered a place to read Biology at Johns Hopkins, ranked 9th in the world by US News & World Report, turning down the possibility of a place at Oxford in order to go there.  Johns Hopkins’ global reputation as a pioneer in medical research has been increased by the pandemic, when the whole world has relied on the statistics provided by its Coronavirus Resource Centre.

Nora Deemer will be going to Barnard College, in Manhattan, one of the four constituent colleges of Ivy League Columbia University, ranked 6th in the world by U.S. News.  Swaarthi Ramanan will also be going to New York, having been offered a place at NYU.  Three students were offered full financial aid worth $80,000 p.a. each at NYU, Abu Dhabi.  An amazing 21 Moir students have received full scholarships from NYUAD in the past 11 years; the first of these recently completed a PhD in Stem Cell Biology at Columbia.

Jiwoo Won was awarded a prestigious Marquis Fellowship at Lafayette: a merit-based full-tuition scholarship awarded to about 25 of the 10,416 students who applied this year.  Other students received generous aid from Denison and Mount Holyoke, other historic liberal arts colleges.

Canada remains a popular destination for Moir students too, with four students offered places at either the University of Toronto or the University of British Columbia in Vancouver. Closer to home, Lakindu Jayawardana was offered a free-tuition scholarship at Hong Kong University, ranked 22nd in the world in the QS rankings, while other students are waiting on the National University of Singapore. 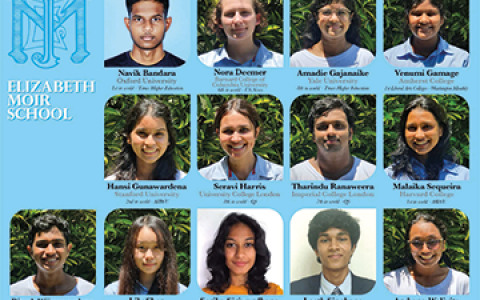